Hyperspectral imaging, a rapidly advancing technology, is a method used to obtain spectral data of a target using a large number of detection bands, generally greater than ten. This post will discuss the specification considerations when selecting either LED or Halogen illumination in hyperspectral imaging applications, which include spectral matching, uniformity, lifetime, form factor, energy efficiency, environmental issues and strobe control.

The broad nature of the spectrum of Halogen lamps, see Figure 1, has made them the traditional choice for hyperspectral applications. Recent technology advancements, however, have made broadband illumination a possibility using LEDs. An advantage of using hyperspectral LED lights, as opposed to Halogen, is the capability to boost the spectrum as required within the range of interest. This is beneficial for applications where illumination is needed to make up for any deficiencies caused by a camera’s response sensitivity or when matching a specific spectral profile is a requirement for the light source. 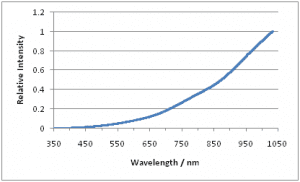 Spectral boosting using LEDs can lead to a more even response and thus an improved signal-to-noise ratio, as shown in Figure 2. This figure displays the use of a LED illuminator over a wide spectral range where large variations in camera sensitivity can occur. The spectrum in Figure 2 was created by ProPhotonix and demonstrates the capability to boost the UV and IR regions according to customer specifications. 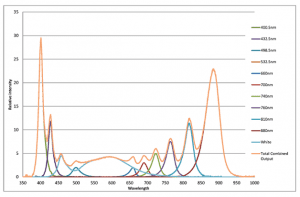 Uniformity is extremely important in hyperspectral imaging. Halogen lamps have a continuous spectrum in the range from 300nm to 2500nm .However, this emission varies considerably across the range, the emission below 500nm is very weak while  the emission in long IR is very strong but this is often undesirable as it can cause unwanted heat emission. It is not possible to adjust this spectrum without the use of costly filters. etc.

The lifetime of the light source can be an important consideration for many hyperspectral applications, especially in production environments where maintenance or replacement of an illuminator can mean significant throughput loss in downtime. Halogen lamps have an average lifetime of several thousand hours. LEDs, in comparison, have a lifetime of tens of thousands of hours. This is at least an order of magnitude better than the lifetime of a Halogen lamp.

In addition, with the inherent flexibility of Chip-on-Board LED-based products like the Cobra MultiSpec, ProPhotonix can design the LED array to reduce the thermal stress on any LEDs that may be less efficient in terms of optical output. The ratio of LEDs incorporated for each wavelength is adjusted to take account of efficiency, thereby leading to improved performance and extended lifetimes.

Halogen lights generate excess heat. This can create additional challenges as this heat can damage the material undergoing inspection. LEDs generate low levels of heat in the emission direction thus significantly reducing on-target heating. The COBRA MultiSpec is a modular light composed of 100mm units,up to a total length of 5m,and has twelve individually controlled channels. Customizing the wavelength selection means that the COBRA MultiSpec can be configured for both hyperspectral and multispectral applications.

The European Union recently instituted a ban on consumer purchased Halogen bulbs due to the environmental and disposal costs associated with their mercury content with the advice to switch to LEDs. That ban should prevent more than 15 million tons of carbon emissions a year. Further EU environmental regulations may also ban halogen lamps for these applications going forward.

Strobing is not possible with halogen lamps. LEDs, in comparison, can be pulsed. The COBRA MultiSpec, for example, has a strobe capability that allows for the configuration of multispectral strobe patterns, enabling rapid data acquisition and analysis. It also can produce up to four optically independent strobe lines pulsed simultaneously or sequentially with a combined delay and response time of less than one microsecond.

Learn More About the COBRA MultiSpec

To learn more, visit the COBRA MultiSpec page and download the datasheet.

Your file ( ) is ready to be downloaded.

You have subscribed successfully.